You need to take your ass somewhere else …

there’s much to be said about the sro auburn hotel that is 481 minna street, and of the occupants, and of the management.

but there’s one particular resident you can always be assured of noticing.  even before he moved into the place he could often be found outside the building, hollering at the other tenants (at one point he said his boyfriend lived there, and that’s why he was always outside the building, even before he himself lived there).  and now that he lives there?  well, more of the same.  this has been going on for at least 18 months.  and we’re not talking about a quick “hey, come here”.  we’re talking about extended tirades of 20-30 minutes or more, at all hours of the morning, day and night.  loud.  grating.  non-stop.

a basic belief of mine is that you should be able to do whatever you want as long as that behavior doesn’t infringe upon the rights of others.  this guy pushes, tears, and rips apart the envelope on that belief.  the police have been called on more than one occasion, for no other reason than to quiet his ass down.

on this particular occasion (Friday, January 7, 2011, 9:30 pm), this guy was standing at the corner of the building and was off on one of his rants.  not wanting to spend the night listening to him, i walked near his building and called the police.  i went near his building because i wanted to speak with the cops when they arrived.  when i initially saw the guy, he was ranting, and smoking something from a pipe, with a lighter flickering several times over the course of a minute or so.  when i was near the building and on the phone with the police, i was across the street from him.  he was still ranting, and still smoking something, from a pipe.  when i was on the phone with the police i asked that they (once again) come to quiet his ass down.  i described him to the dispatcher, and i said that he was smoking something, “probably crack”.  he heard me and, well, the rest is in this video (6:18): 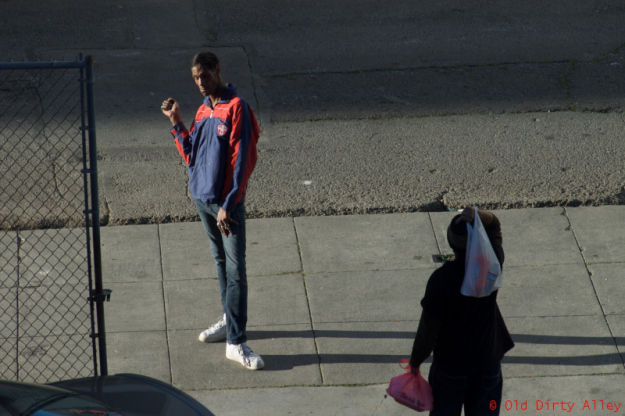 while i was on the phone for a second time with the sfpd (and thus not recording), the guy with the metal bar walked back inside the entrance gate to place the bar on the steps.

when the officers arrived there were five or six residents of the building standing outside.  i explained that i was calling about a noise complaint.  the officer cautioned that for my own safety if i called again i should not come down to the building; that i should call from my apartment and wait until they arrived before showing up at the building.  sorry, but i will not be intimidated by my neighbors.

i had to look up the term peckerwood.  and i can’t help but wonder how things would have turned out had the roles been reversed and it was me who was hurling racial slurs and “faggot”.

these are your tax dollars at work:  supporting the people who live in these hotels and enabling this behavior.  maybe we need to take our ass somewhere else?

(notes on the video:  the quality is less than optimal because it was shot with a phone and because of the low-light; i believe the subtitles accurately represent what was being said but there are a few places where the audio is so low as to make it difficult, if not impossible, to hear, so if you think something is incorrect then please let me know; and, yes, i know about landscape mode … i’m learning :-))

4 Responses to You need to take your ass somewhere else …