i kinda thought i had seen it all.  and i figured if i hadn’t seen it all then i had seen pretty damn close to it all.  but i guess the old dirty alley still has a surprise or two left in her.

it was a pleasant wednesday afternoon.  hearing some noise outside i poked out my head to see what was up.  hmmm.  a naked guy.  i wonder where this is going? 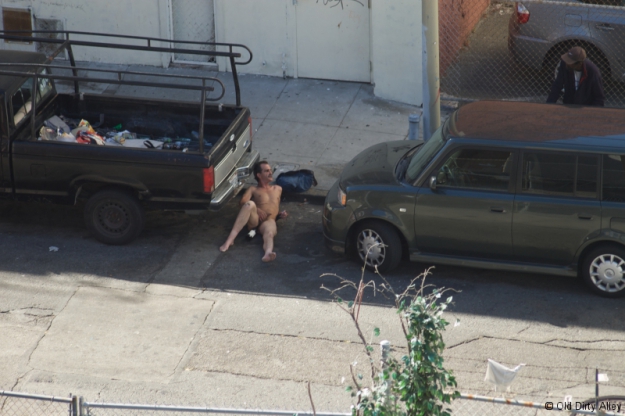 shooting-up.  after cleaning the needles in one of the side-puddles.  this is not what my friends and i meant when we began using the term “puddling” (although our definition isn’t much more pleasant.)

enjoying the spoils of his labor.  until a car comes a long and wants his parking spot.

exploring his options and finally making a selection. (you can see the blood from the injection-site on his left arm in the second picture.)

insert and enjoy! (you can see the blood from the injection-site on his left arm in the fourth picture.)

turn out the lights, the party’s over!

what else is there to say? other than that the cork is still in the bottle.

kudos to the dude for adhering to the reduce/reuse/recycle mantra on that wine bottle … but why is this ok?

20100923 update:  i guess this guy caught more than my eye. check out someone else’s photographs of him on the same day but from a different vantage point.

20100924 update:  N. B.:  i’ve been chastised on reddit.com for not knowing that the guy is probably not shooting smack but is likely shooting meth … my apologies to those in the know.  send me your phone number so the next time this happens (and it will) i can call and get the expert opinion on what is in the needle!

i originally published this on another site, intending for just a few friends to see it.  it seemed to be a little popular, so i’ve moved it to its rightful place.

3 Responses to The Minna Street Recycler